You are a minister on the campaign trail trying to manufacture popularity for an upcoming election. You and your election team decide to take to the streets to distribute some promotional freebies. You print your name, face, a heartfelt slogan and a snapshot of your local policy platform onto a cheap sheet of round paper or cardboard. So far so good. Then, you notice it is 30 degrees celsius outside, so you attach a handle onto the leaflet, make it into a fan, and hand them out to sweaty constituents at a summer festival. Ok, now you have gone too far. You are fired.

Midori Matsushima, now former Justice Minister, did exactly this with her leaflet (pictured left) and was later forced to resign this month amid accusations of vote-buying. According to opposition DPJ lawmaker, Renho Murata, because Matsushima’s leaflet came with a handle and a fan-like frame, it was technically an ‘uchiwa’ (a paper fan). According to Renho, this qualifies as a ‘donation’ of ‘an item of monetary value,’ which is a violation of Article 139 of the Public Office Election Law (Japanese link). The Electoral Commission agreed with Renho.

Cue a flurry of fan-related political assaults across the parliamentary floor in both directions. Renho Murata, having led the attack against Matsushima, then faced questions herself regarding her own round paper leaflet (pictured right), which she had distributed while campaigning for election to the House of Councillors in 2010. In response, she maintained 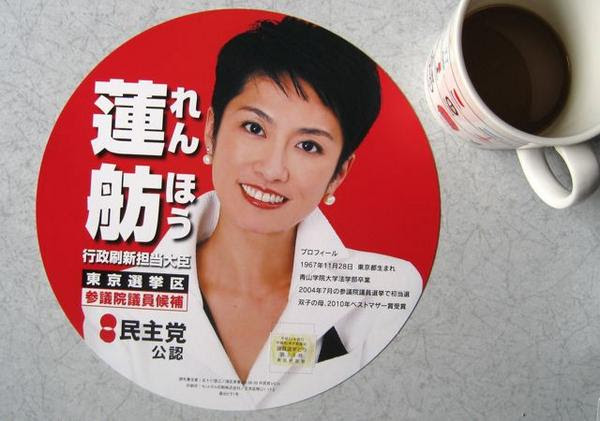 that without a handle or frame, her leaflet does not fit the traditional definition of an ‘uchiwa’ and is therefore perfectly legitimate. The Electoral Commission agreed with her, again, and her non-uchiwa leaflet got the green light.

So, what are we to make of all this triviality? For one, pushing legal loopholes is a very dangerous game. The prohibition against ‘donations’ or distributing ‘items of monetary value’ is a minefield of legal ambiguity that is as easy to get entangled in as it is to exploit. Take, for example, Article 139’s ban on serving any food or drink during an election campaign, ‘except tea and some sweets that are served only ordinarily.’ This means in theory that serving an extra cookie with a mildly expensive brand of tea could make the difference between lawful hospitality and an illicit indulgence of corrupt intent.

Indeed, if one were to take a fastidious interpretation of a clause as vague as a prohibition on ‘items of monetary value,’ then one could reasonably outlaw Renho’s leaflet too, for while it might not much resemble an effective ‘uchiwa’, it could certainly resemble a coaster/ place mat, or mouse-pad, or dartboard, or makeshift poopascoopa, or wobbly table stabiliser, or a myriad of other items.

But did she design the leaflet with such intent? Well, here marks the outer layer of the law – an area of almost unintelligible legal ambiguity (termed ‘zaruhou’ in Japanese). It is the frontier, the penumbra, the gray area of regulatory loopholes where the letter of the law ends and the drama of interpretation begins. Here is the quarrelsome task of determining when an act of self-defence becomes murder; when a genuine campaign contribution becomes a bribe; when harmless hospitality becomes self-serving indulgence – or, if you are in Japan, when a leaflet becomes a fan.

Just days after Matshushima’s disgraced ‘uchiwa’ was brandished in parliament, another fan-like leaflet came under investigation, this one belonging to LDP Deputy Defence Minister, Akira Satō. This leaflet – definitely an ‘uchiwa’ – was approved without spectacle, however, because it had been placed at a reception desk, rather than actively distributed.

When you work in an industry obsessed with scoring points and saving face in front of the voting public, the line between legal and illegal, job and no job, can become deceptively blurry. And it tends to turn politics into something of a fanfare – the kind of fanfare that convenes multiple times to debate nuances in the definition of a fan; that makes a politician as high up as Matsushima, Justice Minister, equivocate on what is clearly an ‘uchiwa’; that can get Matsushima’s ‘uchiwa’ (costing a mere 80 yen a piece to make) sold in Yahoo auctions for 16,500 yen; and that can doubtless make anti-politics cynicism regrettably more fashionable.

“Anger about excessive powers supposedly wielded by Strasbourg judges, Scottish MPs or the European Union is not really about institutional arrangements. It is instead the outlet for a much more visceral rage, the furious sense that the world is not as it should be – and that someone faraway must be to blame.

This is the pool of fury Ukip drinks from, and which the Tories want to channel their way. It imagines a utopia where everything would be well if only we could make our own rules without outsiders’ interference. Some of that sentiment was alive in the yes campaign in Scotland; much of it animates anti-EU feeling, both here and on the continent.

But it feels misplaced, an incoherent lashing-out that frequently hits the wrong target. People have good reason to feel impotent, too powerless to shape their own lives. But that’s not the fault of judges in Strasbourg or bureaucrats in Brussels. It owes more to the vast, borderless forces of globalisation that have upended economic life everywhere. Yet those forces are so much harder to see and harder to blame. So we train our fire on an easier, more visible enemy, like a European court that actually protects us far more than it hurts us.”

Books I Want To Read